A Tour to Zhangjiajie

A Tour to Zhangjiajie The Social Service ‘week without walls’ in May this year was about Chinese traditional culture. Students went to the Zhangjiajie in Hunan province to understand Xiangxi culture. The trip to Zhangjiajie let us enjoy the unique culture of Xiangxi and its beautiful scenery. The beautiful landscape here is different from the other places. Zhangjiajie is famous forits precarious peaks, limpid streams, dense forests, and large karst caves. Thewhole trip was like a dream; the scenery is fascinating and made people want to stay forever. The Miao culture in Xiangxi is by no means the just walking in the scenic spots with crowds of people and selling souvenirs in shops in the ancient city. Besides the poetry of Shen Congwen, there is also the Miao culture that Miao people have guarded for thousands of years. We enjoyed the special meal "Miao king banquet"in the Miao village. The Morong Miao village long banquet is the highest reception ceremony of Miao banquet, which has a history of thousands of years. The guests are served good food. If the guests don't sing, the guests can't enter the door. The host family's singing is to welcome our arrival. We responded in the form of a pair of songs, and we also got two songs right. One is the familiar science song "Water Cycle", and the other is the Chinesesong "we are different" led by our foreign teacher William. After the songs, we were lucky to enter the village and was immediately attracted by the beautiful scenery in the village. The mountain village has a sense of isolation

In the village, we tasted the local tea, enjoyed the local dance, tasted the local food and understood the local culture. This experience is very rare. Only when I learned about the local marriage customs did I know that the man would first try to get married in the woman's house for three years (mainly doing heavy work, cutting firewood for three years, and making silver bracelets, etc.). Our teacher William really experienced the Miao people's "marriage". Fenghuang Ancient Town or Phoenix Ancient Town is famous for its charming scenery of multiple ancient sites of towers, bridges, streets, and other buildings as well as rich Miao culture. The Tuo River, running through the heart of the town, is the mother river of the ancient town. Along the river you will see unique wooden houses called Diaojiaolou (吊脚楼), which were constructed on stilts to keep them safe from the spring floods. This is the first national forest park in China. We visited the core scenic area of Yuanjiajie, which is a "masterpiece", and the location of the movie "avatar"-- Hallelujah Mountain, to explore the mysterious and unpredictable world offloating mountains. Yellow Dragon Cavern has caves within caves, and caves that connect to other caves. The cavern is fantastic – and fantastically colorful – landscape includes features such as stalactites, stalagmites, stone blossoms, stone curtains, stone branches, stone canals, stone pearls, andother, less definable eroded stone forms. Much of the limestoneof Yellow Dragon Cavern glitters with a magical translucence, while the section of the cavern with water – i.e., with lakes and streams – produces a variety of pleasingsounds, from the haunting (and haunted) to the enchanting. In the larger partsof the lake-and-stream cave, boating is possible.

Let's have a look at the teachers' and students' sharing of this cultural trip in zhangjiajie.

On this spring week of the second semester of the school year 2018-2019, students of SIFC have had the opportunity to create great memories by going to an enriching fieldtrip in Zhang Jia Jie in northwestern Hunan Province. As a foreign teacher living in China for many years, I had of course heard about the region and its magnificent scenery, and so I was so excited to be part of this great outer school activity.

For an entire week, we had the chance to visit multiple areas in the region and I was myself very impress by the unique beautiful landscape and culture of the place. On the first two days, we admired the iconic scenery of the tall and steep mountains of Zhang Jia Jie. We took many walks in the national park and took as much photos to remember ourselves of this paradisiac place that inspired the well-known Hollywood box office movie Avatar. We then move to another town to visit an ecological park where the fauna and flora is protected. We saw nature at its best with wonderful lakes, waterfalls and wildlife such as the local monkeys.

Finally we went to visit the renowned and epic old town of FengHuang. There, we admired the beautiful scenery of the combination and the blending between the old buildings and the river flowing between this magical architecture. And a little further to the town, we got to visit the Miao ethnic group, where we were taught about their historical and unique way of life. Over there, I got this great opportunity to be part of a Miao marriage and play the role of spouse, hahaha. In conclusion, I am so grateful to have accompanied the students of the middle school in this great outdoor activity, and I have seen and learn so much. What an enriching experience! 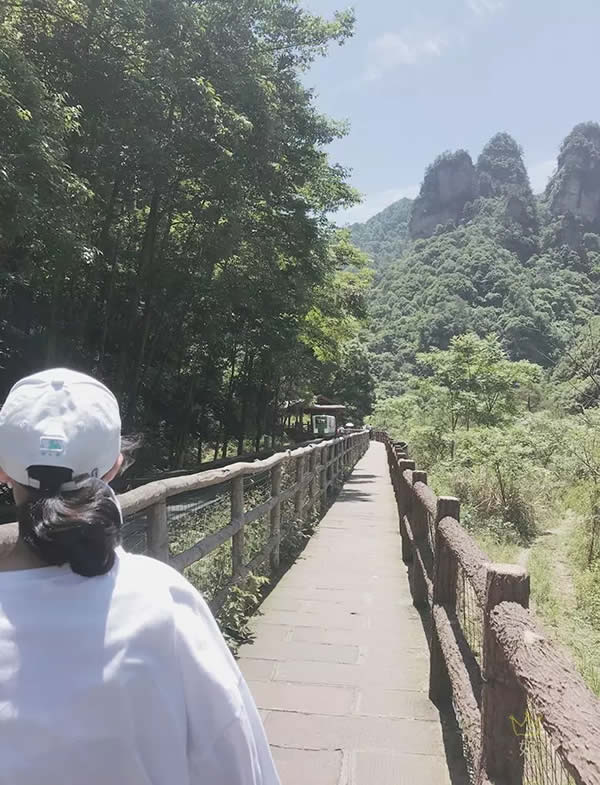 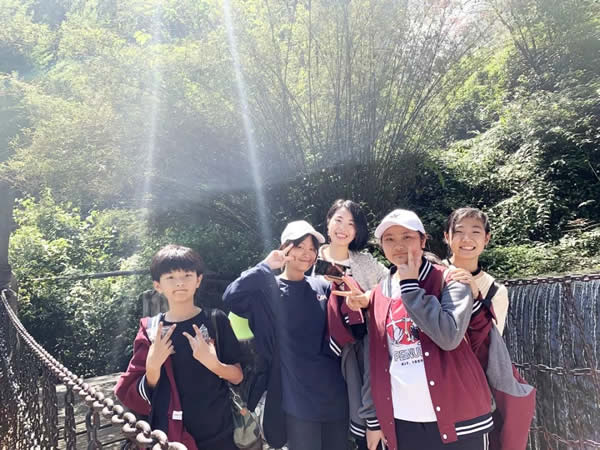 A trip to Hunan 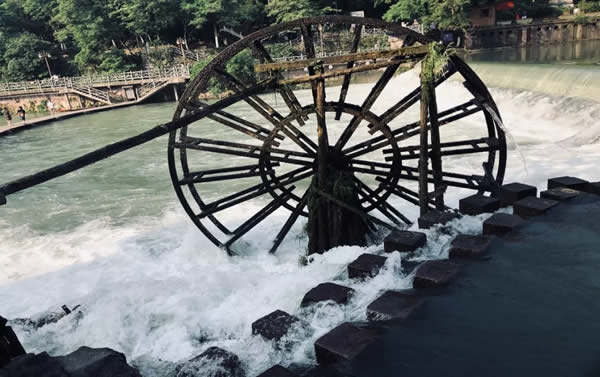 First, let me tell you about Yellow Dragon Cave. YellowDragon Cave lies at the eastern end of Wulingyuan Core Scenic Zone, where tourists can find caves contained in caves, rivers hidden in caves and a large number of scenic spots scattered everywhere. Inside the cave, it is very cold,it is always 16ºC. The stalagmite known as ''sacred Needle for Stabilizing thesea'' is unique in China. It is just like an underground ''magic palace''.Yellow Dragon Cave is more beautiful than the outside world.

Secondly, let's talk about Fenghuang Ancient Town. This isan old town built up in Qing Dynasty, is still being kept in its original appearance with 300 years passed. The Ancient Town is located in the southwestHunan Province, bordering the prefecture—level cities Huaihua to the southeas tand Tongren (Guizhou) to the west. The wooden houses and stones roads are thetypical scenes here. This is a very beautiful places too.

Third, we went to Golden whip stream. There has many wildmonkeys. At Miao village, we ate Miao food. Then we went to Zhangjiajie, withits very amazing mountains……

This is our trip, we were tired but happy.

The Trip to Zhangjiajie

The Zhangjiajie is a place which is beautiful and surround by a lot of mountains and forest, as well as my hometown, this trip is very interesting.

The first day, we arrived at Zhangjiajie, we first go to the Zahngjiajie national park, I see a lot of beautiful landscape and some different shape of mountains, although in Shenzhen, there’s also have a lot different shape of mountains, but I still think that the mountains in Zhangjiajie are beautiful. On the second day, we went to the Huanglong cave. Inside of this cave, there are numerous different shape but very beautiful rocks, these rock are growing every day, but people cannot notice that in one day, there is a special rock which were reach at the top of this cave. On the third day, we went to Baofeng lake, this is the biggest lake In China, this lake has a fall, this fall are very high, it is near the Baofeng lake, there are some giant salamander, we can buy some food for them. On the fourth day, we went to the fenghuang ancient city, there is beautiful with it night. The fifth day, we see the landscape in fenghuang ancient city, and we went to miao stockaded village, it is beautiful. The trip to Zhang Jiajie let us have a good chance to enjoy the time that we could play together for about 5 days.  Even though the flights was delayed we still played like Crazy children.

When we arrived at the hotel. It was already 4 o'clock . So we went to bed as fast as we can.  Waiting for the coming of the next day.

The" real" trip is start now!  First we visits the mountain of Zhang jiajie, Yhang jiajie and Yuan jiajie. The mountain was really high.  We have to ride elevator, the world's highest elevator to get to the top of the mountain. We also tried the Hunan's food. The next three days we have visited Miao village, Phoenix Water town and blablabla. The sad thing is, we saw a bunch of garbage are floating on the water of the Phoenix Water town. We thought it was the “resource” of the GPGP (great pacific garbage patch.) Many people threw garbage in the water and they think it was just normal, but for us, it was a horrible action to the marine animals because we have learned that. So I think everyone in this world have to know that we need to save the sea animals, by little by little. Back to the day that I first gone to the ZhangJiaJie, I still remember when I  arrived I was appointment about the hotel. However, now I think this will be a memorable adventure.

When we arrived at the foot of a hill I was totally distractive by the spectacular mountain ranges and captivated by those magnificent pose of the mountains.

After that I think it’s the Phoenix Town. It’s really beautiful and grand. It’s old but when you see it closer I can promise you will love it.

At last, we gone to the Miao Village, the people right there aren’t like us they were really enthusiastic and kind.

I believe it's the most interesting travel I have ever done. I climbed  mountains, walked twenty miles, I studied the things about the Miao Village, I remember how beautiful is the Yellow Dragon cave is, I got lot of lot of interesting things I had ever learned. It’s really a precious memories.

A Tour to ZhangJiaJie

On the beginning of our “Zhangjiajie”field trip, Which is Sunday, May 19th, I went out with a suitcase and a bag that full of luggage. I was surprised and cannot believe that the day had come so quickly. But the touch of my bag and the ticket in my hand seem so realistic.

In this way, the trip had began，we visited many attractions. They are all beautiful and fascinating，But the attraction that impressed me the most is Fenghuang ancient town. It is located in the southwest of Jiangxi Tujia and Miao autonomous prefecture in Hunan province.

The origin of its name is very attractive to me because I think it is interesting，story is like this: in ancient times there were five giant sycamore trees planted here, representing five directions. These sycamore trees once welcomed phoenix roosting. In order to remember this, people named here Phoenix.

In Fenghuang ancient town there are many alleys. Every alley has its own independent features and shops.

There are many shops selling foods ，small commodities ，clothing ，carving and so on. but the mean characteristic that was really impressed me is its style ，classic and elegant but it also very artistic. At night，the town was still bustling. I really love this kind of atmosphere.

However，this trip gives me lots of fun, let me learn more knowledge and other people's habitude. For example, in Miao village, people used their songs to show their emotion. Usually, they will have Silver jewelry, Miao embroidery, and batik on their clothes because it's there mean characteristics of Miao costume. 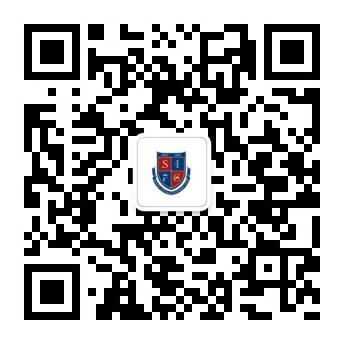